The invisible zoonosis (I): Salmonella in pig meat

Salmonella is a major foodborne pathogen worldwide. A total of 91,857 cases of salmonellosis were reported in the European Union during 2019 (EFSA 2019), of which 8,730 were registered in Spain. The ingestion of eggs and their products, followed by pork and pork products, are the foodstuffs most commonly implicated in human infections.

S. Typhimurium together with S. Enteritidis are the most common zoonotic agents. In humans, salmonellosis causes gastroenteritis with typical symptoms such as diarrhea, vomiting, abdominal pain and fever, which appear between 6 and 72 hours after ingestion of the contaminated food. Usually, the disease is self-limited and does not require antibiotic treatment. However, in severe cases, ciprofloxacin and cephalosporins are the most widely used antibiotics for its treatment.

The establishment of Salmonella control programs in poultry farms at regional and autonomic levels have reduced the prevalence to less than 2%. However, in pigs at slaughter the prevalence is approximately 30% (EFSA, 2016). The latest reference studies positioned Spain as one of the countries of Europe with the highest prevalence in pigs, with 53% and 64% for fattening pigs and breeding sows, respectively (EFSA, 2008; EFSA 2009).

In swine, salmonellosis usually affects recently weaned pigs and pregnant sows, producing bloody diarrhea. However, asymptomatic or subclinical infections are most common. Salmonella can remain in mesenteric lymph nodes or in the intestine for long periods of time, and can replicate and be excreted intermittently in faeces depending on different factors such as stress, transportation, etc. These asymptomatic carriers represent a reservoir of the pathogen, since they do not present clinical signs or visible lesions in the slaughterhouse, evading routine control systems.

Different studies have demonstrated a number of risk factors associated to an increase in the excretion of Salmonella, such as reducing food intake prior transportation, transport and lairage. Waiting time facilitates the excretion of Salmonella and the horizontal transmission of the pathogen between animals. Salmonella contamination of carcasses is directly related to contamination of the skin prior to stunning. For this reason, it is essential to properly clean and disinfect the lairage and limit the waiting time as much as possible. If the floor of the stables is clean during the waiting period, the probability of skin contamination is reduced from 70% to 36% (Rossel et al. 2009).

Different studies performed in the abattoir have detected a high prevalence of Salmonella in tonsils, and a positive correlation between prevalence in tonsils and its presence in carcasses. There are also studies that, in addition to tonsils, detect high levels of Salmonella in mesenteric and ileocecal lymph nodes (Scherer et al. 2008). Submandibular lymph nodes could also be a focus of cross contamination if incisions are made during inspections (Small et al. 2006). 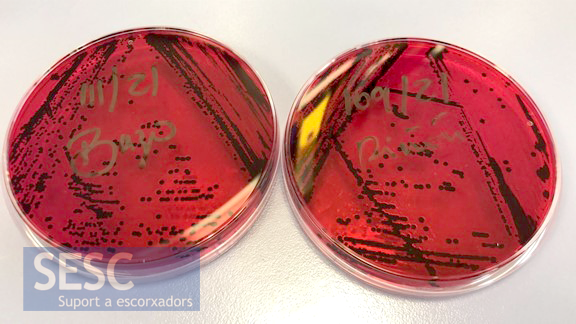 Stunning, bleeding, and scalding are critical points for Salmonella contamination. If stunning is performed with CO2, excretion of faeces easily occur facilitating skin contamination (EFSA 2010). If the animals enter the scalding tank very dirty, the probability of contaminating the water increases, therefore, it is very important to keep the tank temperature high and constant (60-62ºC). The amount of water in the tank is also a factor to consider. If this is insufficient, the proportion of organic matter in suspension increases and also the probability of contamination with Salmonella.

In general, stunning and bleeding are processes in which Salmonella contamination increases, whereas scalding, peeling and singeing generally decrease contamination (Bolton et al. 2002). However, the peeling equipment can be contaminated if the hair is dirty with faeces, therefore, its disinfection is important. Singeing also reduces contamination, its effect depends on time and temperature, which should reach 100ºC. Manual machines have been found to apply more continuous and specific heat to carcasses than automated singeing. Polishing, however, is a process that can be a source of cross contamination, since stainless steel scrapers and nylon brushes are difficult to clean (Delhalle et al. 2008), and also favor redistribution of bacteria to uncontaminated areas.

Evisceration is the most critical point in the process, it is estimated that 55% to 90% of the carcasses positive for Salmonella are contaminated at this stage. During evisceration, there is a risk of gut perforation. Incisions during removal of the red viscera and intestine increase the prevalence of Salmonella in carcasses and in the gut, respectively. Therefore, it is very important to work with standard  operating prodedures and to properly clean and disinfect knives with water at ≥ 82ºC, or equivalent methods. Some slaughterhouses add a cold water cleaning step after evisceration that helps decontaminate the carcasses. Others divert visually contaminated animals that go through a process of trimming of the contaminated parts. A recent study describes high levels of Salmonella after evisceration on the forelegs, head, sternum, and throat (Biasino et al. 2018). These types of samples are not normally taken during routine inspections

To minimize the proliferation of bacteria, cooling must be done quickly and in such a way that the internal temperature of the carcasses is kept at ≤ 7 ºC. Carcases hooks must also be clean to limit cross contamination. A Belgian study (Delhalle et al. 2008), concluded that practices such as scalding with steam, second flaming after polishing, and complete cleaning and disinfection of the splitting machine several times a day were beneficial for reducing Salmonella prevalence at slaughter.

The slaughterhouse process is a critical step in the production line to reduce and minimize the entrance of Salmonella in the food chain and protect consumers health. Therefore, it is essential to maintain a correct system of self-control based on the hazard analysis and critical control points (HACCP) as well as a high level of hygiene. Once the processing line becomes contaminated with Salmonella, this can easily spread across the slaughter line contaminating machinery, knives, carcasses and even workers.