During 2019 SESC has managed a total of 149 queries. Of these, 6 were solely telematic and the remaining 143 requests included samples for laboratorial analysis.

During 2019, 23 posts have been published in this blog in Catalan, Spanish and English. Of these, 13 corresponded to diagnostic challenges. We had a total of 150.127 visits.

Here is a summary of this year’s data. We’d like, once again, to thank the collaboration and effort of the pathologists and animal health experts from IRTA-CReSA, the SDPV and the Veterinary School of the UAB as well as the staff of the Public Health Agency of Catalonia ( ASPCAT), especially to the official veterinary inspectors who with their contributions make possible the success of this page and this service. 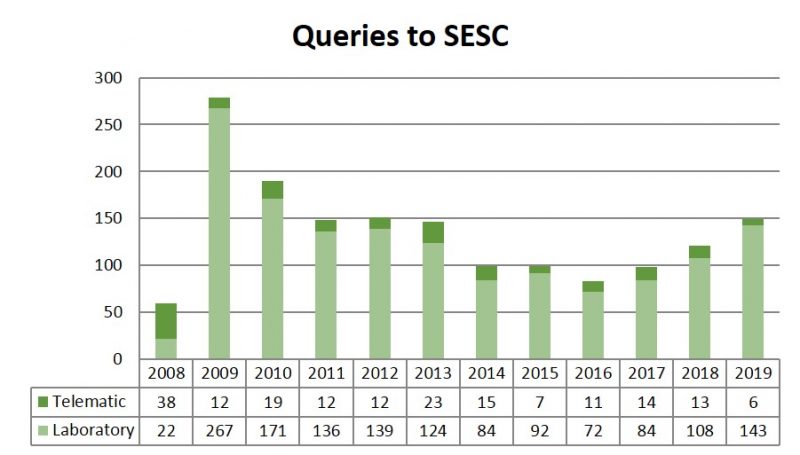 Evolution of the number of queries recieved at SESC, this year the absolute number of queries has gone up, but telematic ones have dropped. The increase is partly due to higher numbers of suspected tuberculosis and swine fever cases. 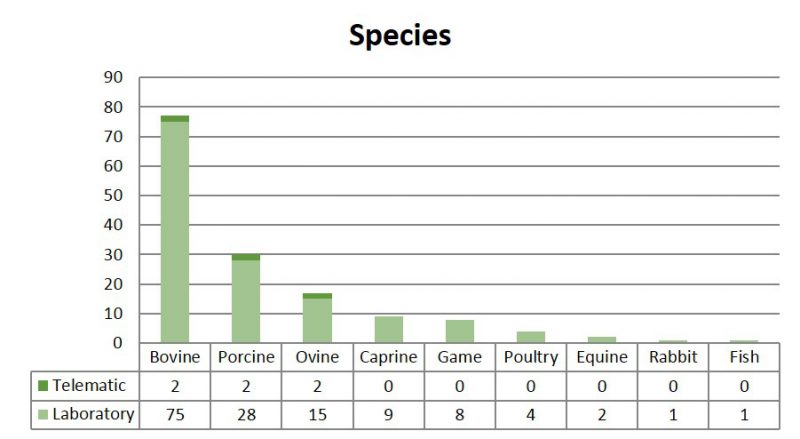 Species distribution of the queries arrived at SESC. Once again, the bovine sector brings the most samples, especially for confirmation of the diagnosis of zoonoses such as tuberculosis and bovine cysticercosis. For the first year we have received a consultation regarding lesions in a fish. 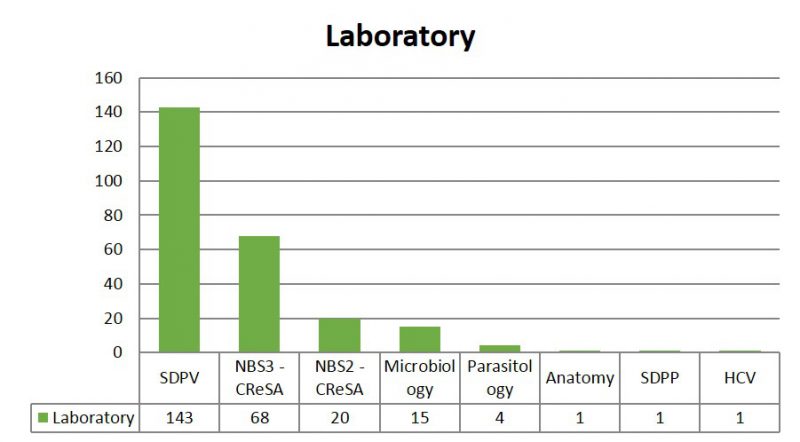 Distribution of the samples analyzed according to the diagnostic service involved (number of reports). SDPV: Diagnostic service for veterinary pathology. NBS3 IRTA-CReSA biocontention level unit 3. NBS2 conventional IRTA-CReSA laboratories. SDPP Fish Pathology Diagnostic Service. The laboratories of microbiology, parasitology and Anatomy are those of the Veterinary Faculty of the UAB. The same query can generate different samples in the same or different laboratories.

At the beginning of the year we issued the THE 100 GRANULOMA CHALLENGE with the aim of achieving a non-tuberculous granulomas sumission rate of 0.1 (per thousand slaughtered animals).

Despite a significant increase in suspected tuberculosis suspicions (47 this year versus 33 suspected cases in 2018, see Table 1), with respect to the bovine species, only 27 cases (far from the 100 proposed) were referred, of which 17 were non-TB (far from the targeted 50). So there is still room for improvement, we are now resetting the granuloma counter to zero and encouraging meat inspectors, as always, to submit any tuberculosis-compatible lesion to SESC to maximize the effectiveness of passive surveillance. The good news is that at the end of 2019, the prevalence of bovine tuberculosis in catalan herds was almost 0%, so we need to work hard to keep this numbers in the following years to be able to reach the officially TB-free region status.

Table1: Summary of suspicions of mandatory declaration diseases and zoonoses of the veterinarians who sent the samples and other diagnosed processes.