An (atypical) case of PDNS that set off the alarms

Samples were submitted of a 6-month-old hybrid male pig carcass with widespread petechial haemorrhagic lesions of lymph nodes, skin, kidneys, spleen, and other viscera, as well as gallbladder oedema. No signs of disease were observed in any of the pigs during the ante-mortem inspection. The veterinary service believed this to be a septicaemic process, but they wanted to rule out ASF/CSF because the lesions were compatible with these diseases. The possibility was unlikely since only one animal was affected in a batch of 48 animals.

After recovering from the inicial fright when looking at the images and the samples, the laboratory of virology at IRTA-CReSA performed the PCR and RT-PCR to detect ASF and CSF, respectively, on a weekend, with a a negative result. Once calmed down, histopathology was performed to clarify the nature of the lesions. We sent samples of lymph nodes, stomach, kidney, spleen, and tonsil to the pathology diagnostic lab.

The lesions observed microscopically are typically those of a generalized haemorrhagic diathesis, with the presence of variable amounts of blood in the medullary sinuses of all evaluated lymph nodes and haemorrhages of variable extent in the gastric submucosa. In addition, the kidney showed fibrinous exudative glomerulonephritis as well as interstitial haemorrhages of limited extension. This kidney lesion is morphologically classified as porcine dermatitis and nephropathy syndrome (PDNS). But in this case, the skin lesions are haemorrhagic, not necrotizing lesions as seen in typical PDNS cases.

In this case, since only one animal was affected, it would have been rare that ASF/CFS was involved. Even so, the images of the lesions may be so similar that laboratory analyses are essential to establish a definitive diagnosis. In the current epidemiological context, we further encourage veterinarians to refer any ASF/CSF suspicion to the SESC as soon as possible to rule out such infections. Early detection is one of the key pieces to control teh disease in case of an eventual entry in the country. The preferred samples for viral detection are lymph nodes, spleen, tonsil or blood, but we recommend that any altered viscera are sent in order to facilitate the task of reaching a definitive diagnosis. (AC) 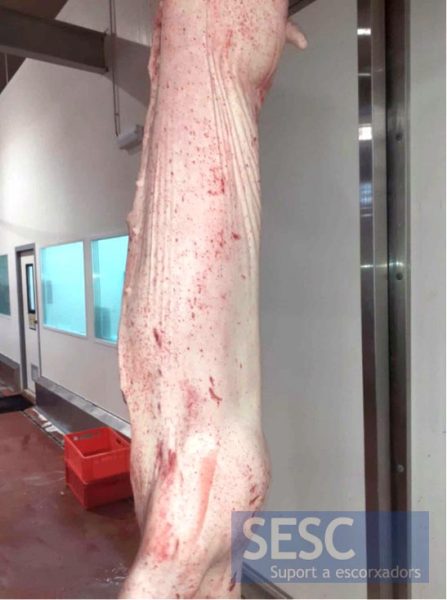 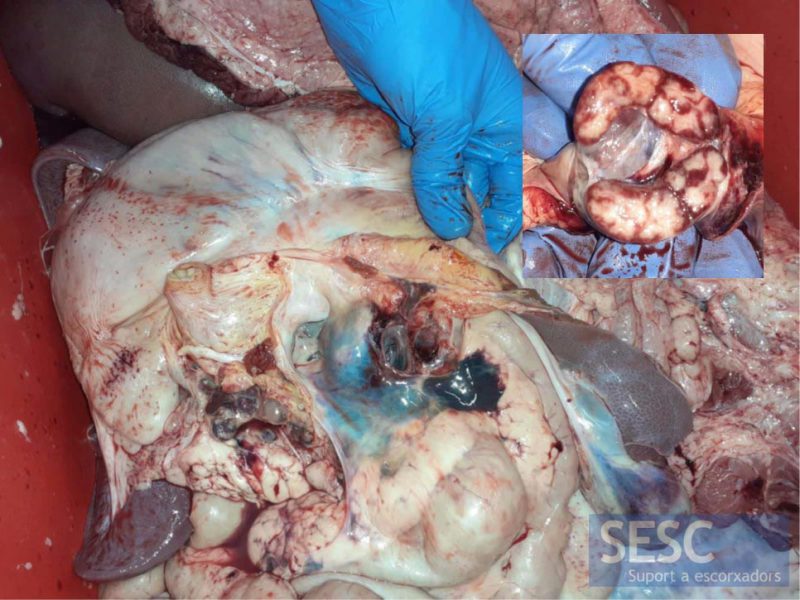 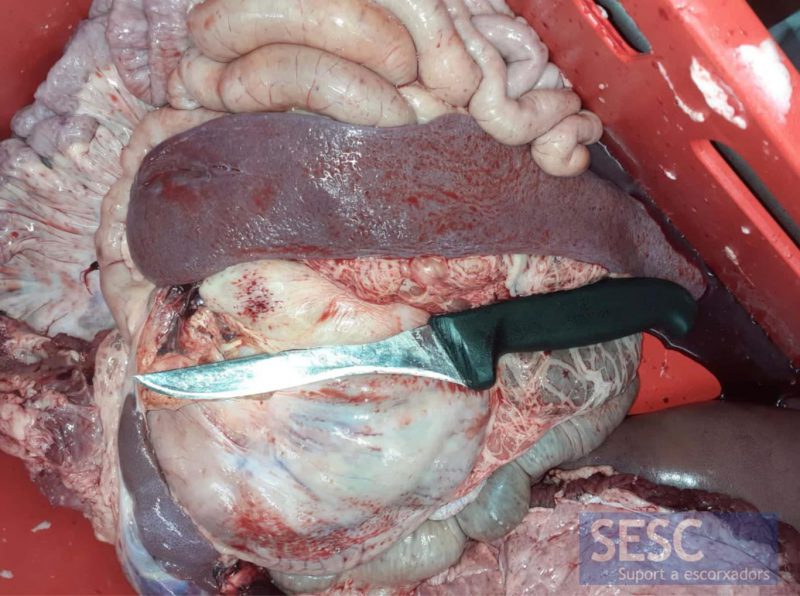 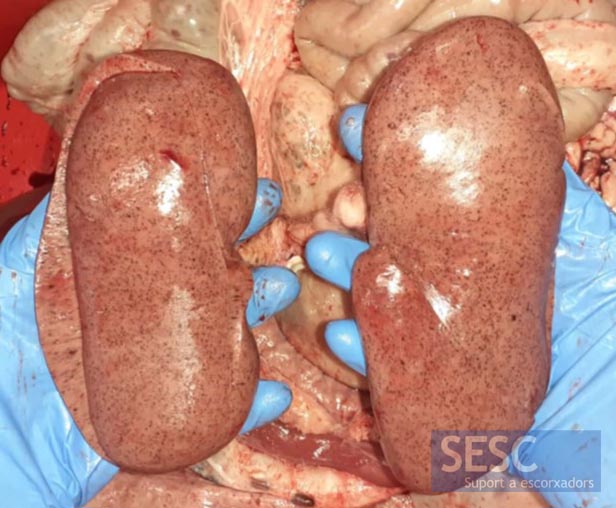 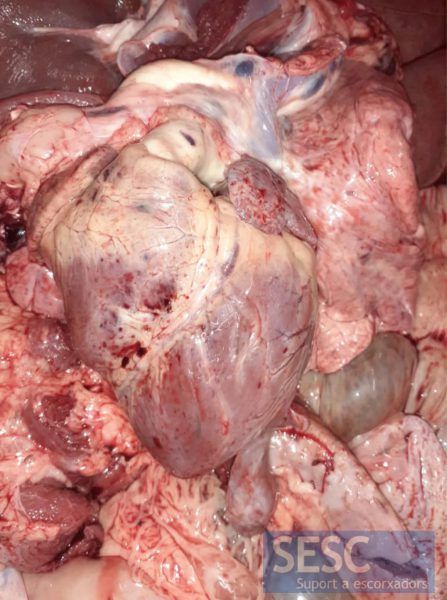 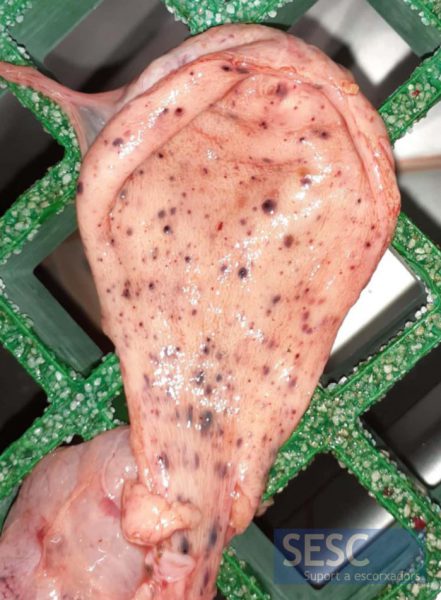 The mucosa of the urinary bladder also shows generalized petechiae. 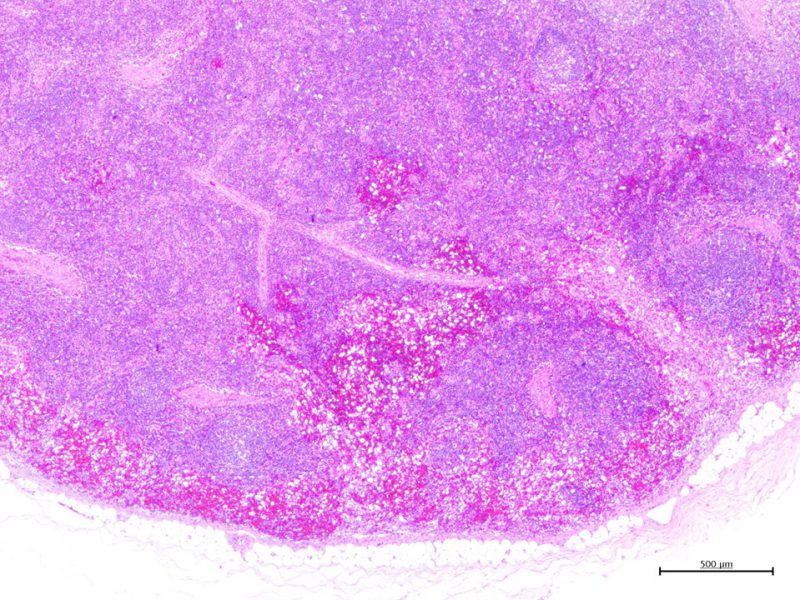 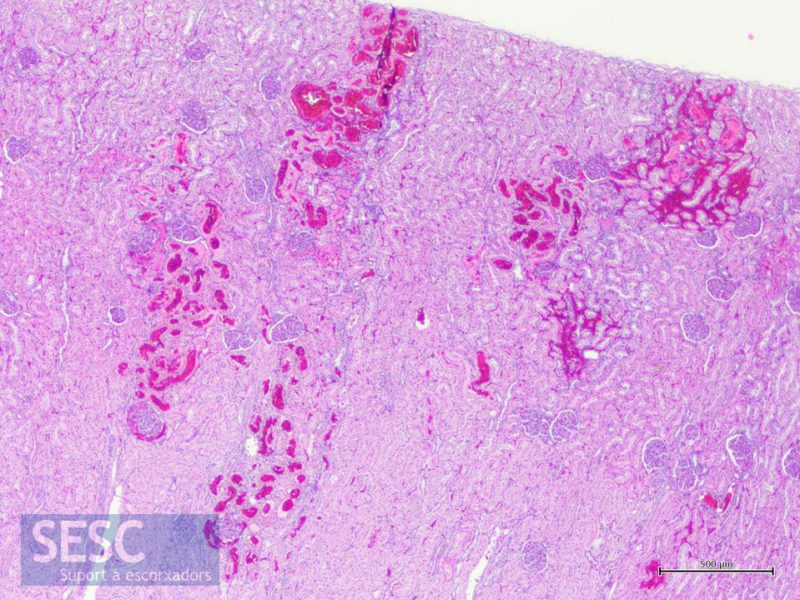 The petechiae observed in the renal cortex are interstitial haemorrhages of variable extension. 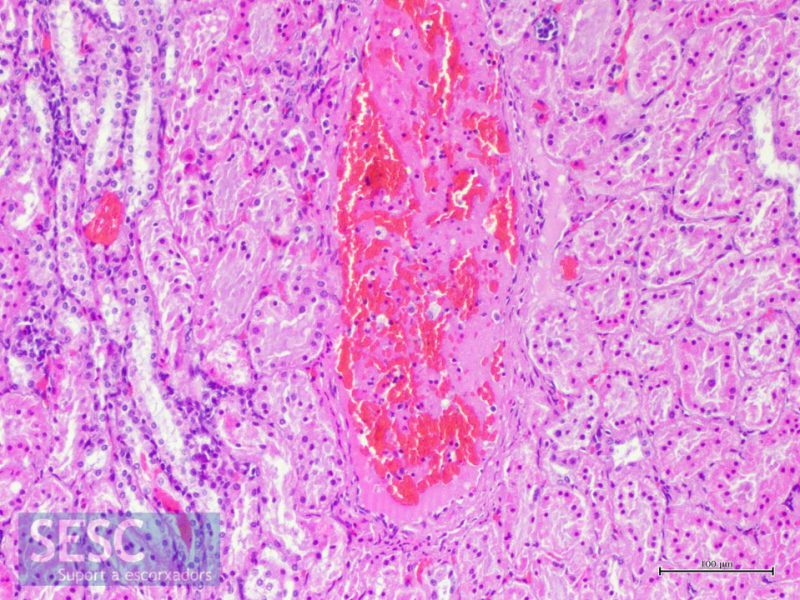 Necrotizing vasculitis in one of the renal vessels, characteristic lesion of PDNS. 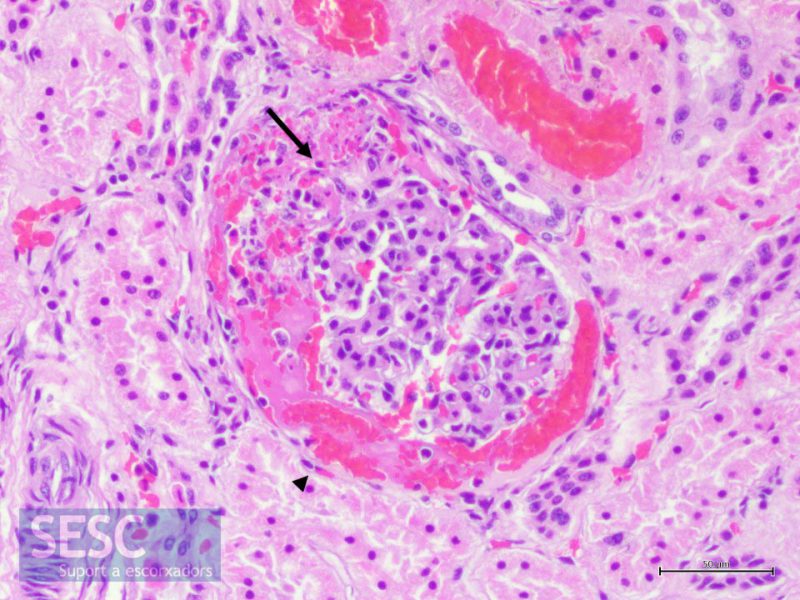 Exudative fibrinous glomerulonephritis. Detail of a glomerulus showing fibrin and free erythrocytes within Bowmann’s capsule (arrowhead), as well as segmental necrosis and presence of PMNN in glomerular tufts. 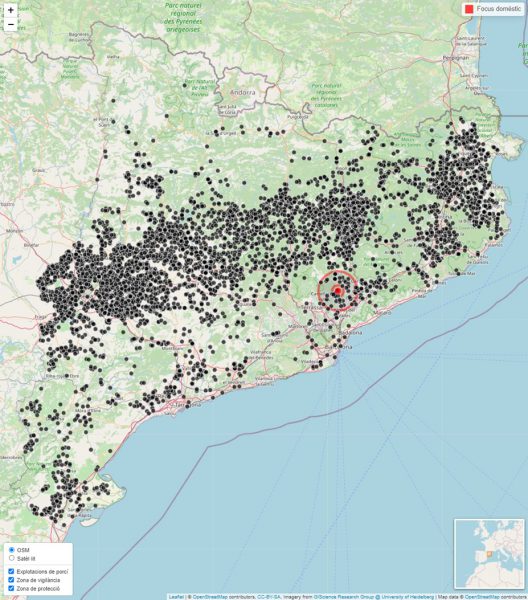 The IRTA-CReSA epidemiology group has developed a software, commissioned by the DARP, which allows, immediately, to generate a map of the distribution of pig farms in Catalonia with protection and surveillance zones around the affected farm (red circles). In this simulation, both areas contain a total of 55 pig farms, which should be visited and tested, and a total capacity of 73,399 animals, which would be immobilized until the visits were carried out. The affected farm has a total capacity of 3,150 animals which would be slaughtered.