Hepatic abscesses in an adult bovine

In a 37-month-old cattle carcass belonging to the brown Pyrenees breed, multiple nodules of 2 to 3 cm in diameter were observed in the liver, with a soft, yellowish content with purulent appearance. When removing the liver with the rest of the viscera, adhesions to the rumen were observed and an abscess with blackish fluid content ruptured.

The histopathological study revealed that the abscesses observed showed a lytic necrosis centre with abundant coccoid bacteria, surrounded by a rim of neutrophils that was in turn delimited by foamy macrophages, fibrosis and lymphoplasmacytic cells, thus confirming that the lesion consists of subacute multifocal and generalized hepatic abscesses.

The sample was also sent to the microbiology service, where Trueperella pyogenes was cultivated in large quantities, as well as colonies of Staphylococcus sp.

Hepatic abscesses can have multiple origins, but not all are equally likely, the casuistry being highly variable:

In conclusion, in this case the age of the animal, the generalized multifocal nature of the abscesses, and the absence of other systemic lesions suggest a portal hematogenous spread; however, it is a common presentation in calves, but very rare in adult bovines. Another uncertain possibility in this case is that the hepatitis detected was related to the abscess described by the inspectors (broken when removing the viscera).

Another interesting aspect that is probably worth mentioning is the bacteria involved in this injury. The literature initially attributes the origin of liver abscesses to the arrival of Fusobacterium necrophorum via the portal vein, but the commonly observed lesions and microbiological results almost never coincide with this statement. This contradiction is explained by speculating that the original necrotizing necrobacillosis lesion is secondarily contaminated with pyogenic bacteria, the most frequently isolated being Trueperella pyogenes. (AC) 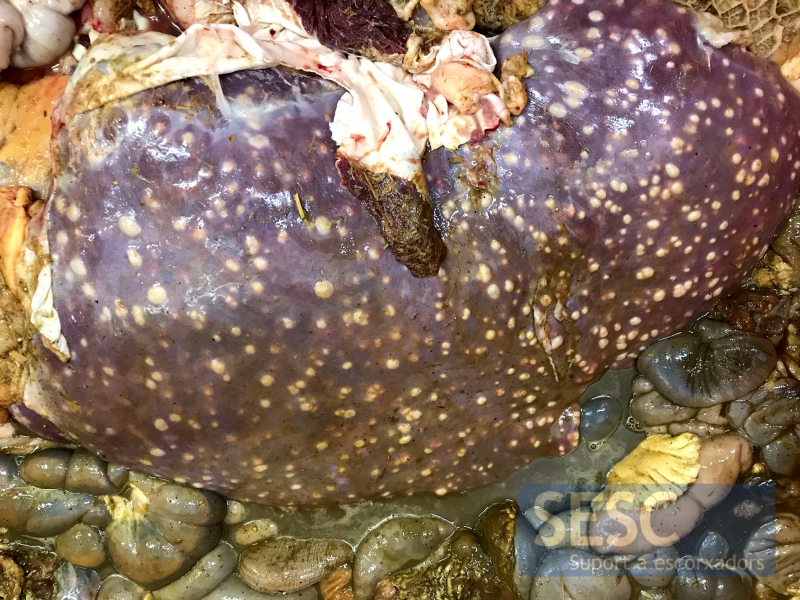 Liver and other viscera, in which the multiple hepatic abscesses can be seen throughout the serosa surface. 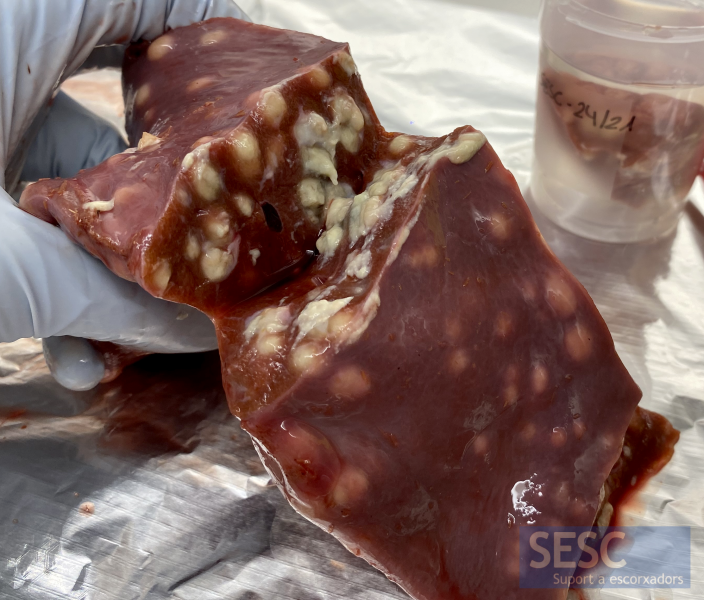 Cut section of the liver, where the hepatic abscesses can be seen through the entire parenchyma.