We received an inquiry regarding a batch of 230, 2-3 months old, lambs in which 100 of them presented lesions in one or more of the following organs: lymph nodes, lungs, kidneys, liver, peritoneal serosa... Cutaneous abscesses in the head region were also reported.

We received representative samples of the affected organs. The lymph nodes presented abscesses of up to 7-8 cm in diameter, with a highly fluidified, yellowish-greenish content. The cutaneous abscesses presented a very similar appearance. The histopathological study of these lesions revealed suppurative to pyogranulomatous lymphadenitis and panniculitis, in which cocci were observed arranged in tetrads and clusters. The microbiological study of all these lesions yielded pure cultures of abundant colonies of Staphylococcus coagulase +. These findings are compatible with Morel’s disease. This disease presents with abscesses ranging from 4 to 10 cm, generally close or within lymph nodes, affecting generally the head and neck region.

The lung revealed a multifocal generalized nodular pattern, with nodular and irregular areas of 0,3 cm showing greyish coloration, homogeneously distributed within the submitted lung fragment. Microscopically these nodules corresponded with foci of chronic interstitial pneumonia linked to lymphoid and pneumocyte type 2 hyperplasia. The kidneys revealed irregular multifocal to coalescing pale areas, mainly within the renal cortex. Histologically it corresponded to a chronic interstitial nephritis and diffuse membranoproliferative glomerulonephritis. These two findings are potentially compatible with an infection by the virus of Maedi-Visna, therefore we submitted these samples for a PCR against such virus to NEIKER laboratory, which resulted positive in both tissues. Although Maedi-Visna is complex and variable, it is characterized by interstitial pneumonia (generally diffuse but occasionally a multifocal-generalized pattern like the one in the present case), the already commented renal lesions and non-suppurative encephalitis, which wasn’t confirmed in our case.

Aside from that, the lesions reported in the liver and peritoneal serosa corresponded to cysticercosis and chronic colangiohepatitis of parasitic origin (trematodes). The presence of all these processes could be explained by a poor sanitary management of the farm, although the infection by the virus of Maedi-Visna, as it’s a chronic and consumptive process, could facilitate or aggravate the development of other pathologies (as in Morel’s disease). (AC) 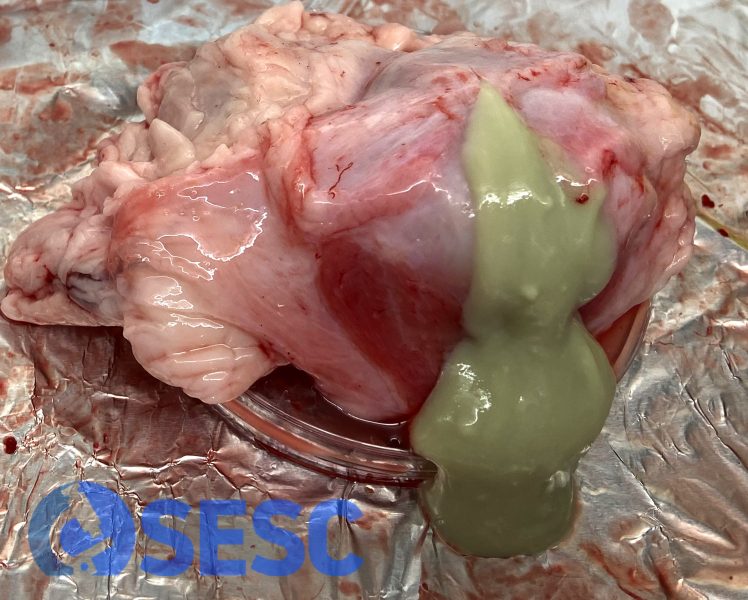 Inguinal lymph node. It appears largely increased in size, and when cut it oozes abundant yellowish to greenish pus. 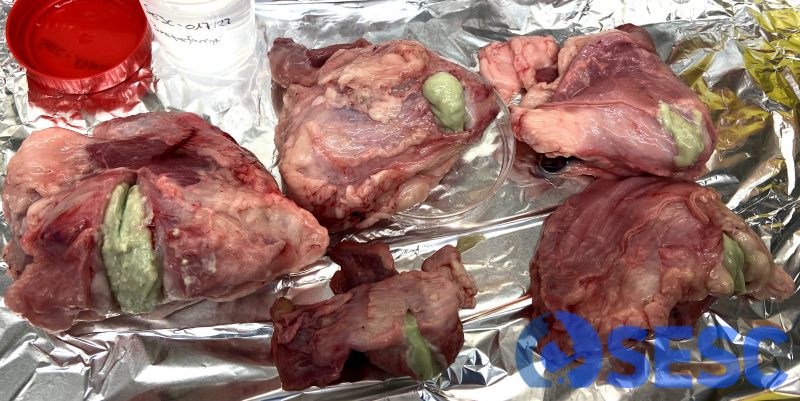 Retropharyngeal lymph nodes. All present a very similar appearance as the one noted in the inguinal lymph node. 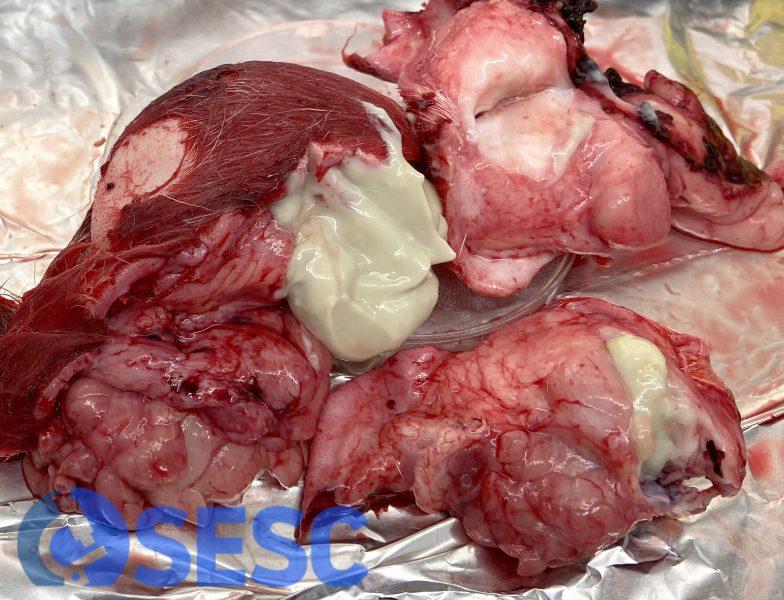 Cutaneous abscesses in the head region. A very similar appearance to the lymph nodes is seen, although in this case the lesion is not associated (apparently) to a lymph node. 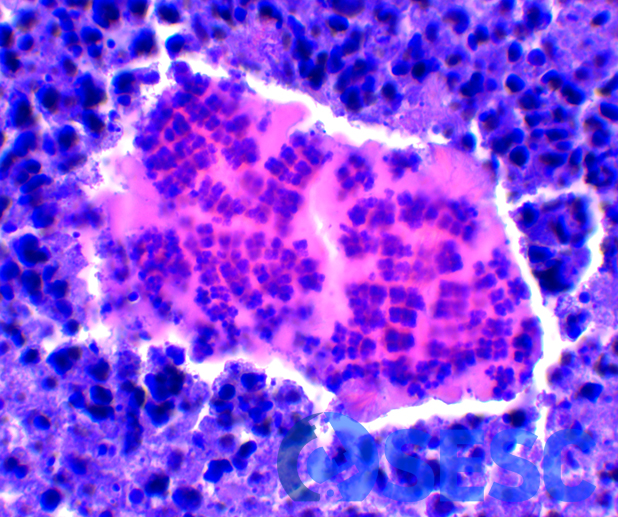 Histologic detail of the suppurative material. Within necrotic debris and the abundant quantity of neutrophils, cocci colonies can be seen arranged in clusters and tetrads (characteristic of staphylococci). 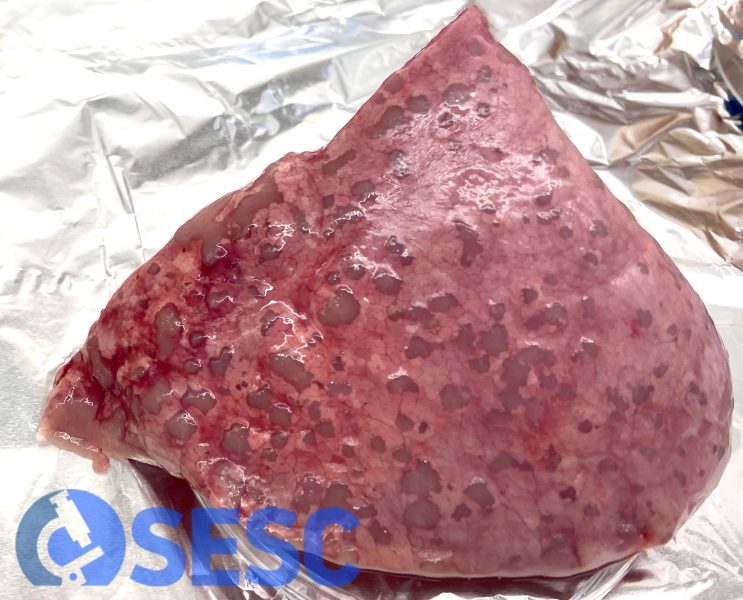 Lung. Nodules of 0,5 cm in diameter can be seen, with multifocal generalized distribution and greyish coloration. Although Maedi-Visna interstitial pneumonia is generally difuse, it is seldom described this nodular multifocal pattern. 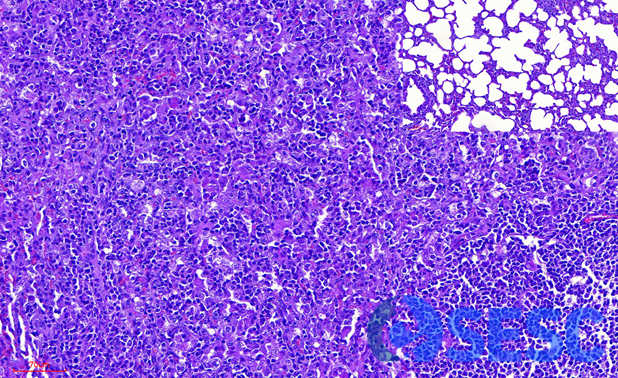 Histologic detail of the previous image. The nodules correspond to areas of alveolar interstitial inflammation and pneumocyte type-II hyperplasia (multifocal interstitial pneumonia). At the top right, detail of a non-affected region can be seen, which reveals that the lesion obliterated the totality of alveolar lumina. 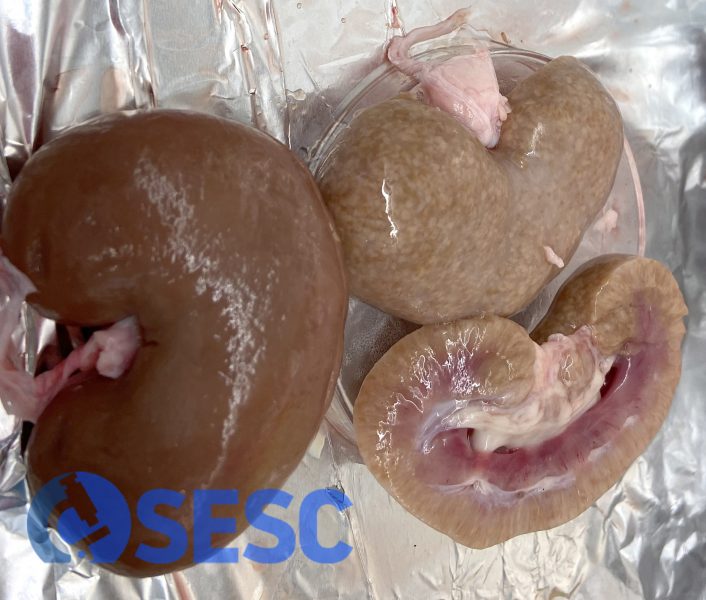 Kidney. A multifocal generalized pale coloration can be seen on the Surface and at the cut section, also showing a slightly irregular and rough surface. 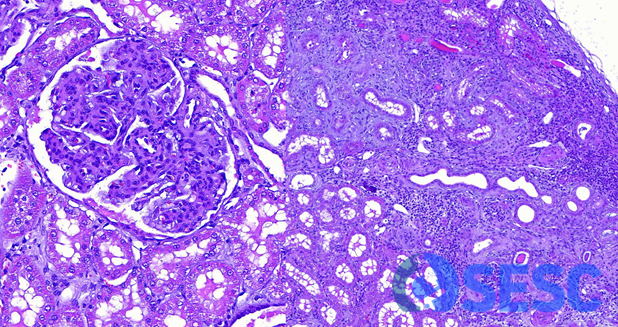 Histologic detail of the renal lesion. At the left, an increase in mesangial cellularity and enlargement of the basal membranes of glomeruli can be seen (membranoproliferative glomerulonephritis). At the right a loss of renal parenchyma can be seen, which is replaced by fibrosis and lymphoplasmacytic inflammation (chronic interstitial nephritis).