Arteriosclerosis in a calf’s myocardium

Heart of a twelve-month-old cross-breed calf presenting a focal nodular lesion of approximately 1 cm in diameter located at the subendocardial level of the left ventricle. It protrudes into the lumen of the ventricle and has a homogeneous whitish appearance and increased consistency. The sample was submitted as a suspicion of bovine Cysticercosis.

Histopathology confirms that it is a degenerated medium-caliber artery characterized by a marked fibrous reaction of the external layer (adventitia) and generalized hyperplasia of the middle and intimal muscular layer. This lesion is indicative of arteriosclerosis, a chronic degenerative process of the blood vessels (especially arteries and arterioles) that occurs with the disruption of the normal architecture of the vessel and replacement of all the layers of the vascular wall by fibrous tissue and hypertrophic muscle fibers (sclerotic plaques) which causes its macroscopic nodular appearance. In the majority of cases, these vascular alterations do not usually provoke hemodynamic or thrombotic alterations, so they go unnoticed. However, in some cases a partial obliteration of the vascular lumen can be observed and therefore, alterations in blood flow leading to thrombi and ischemia, especially in the brain and heart. It is unknown what causes the damage to the vascular wall, but all those factors that alter hemodynamics could favor its development.

Masson's Trichrome staining allows us to differentiate hypertrophic muscle fibers (red color) from the immature or mature collagen fibers observed in the adventitia layer and between the muscle fibers of the middle and intimate layer (blue color). 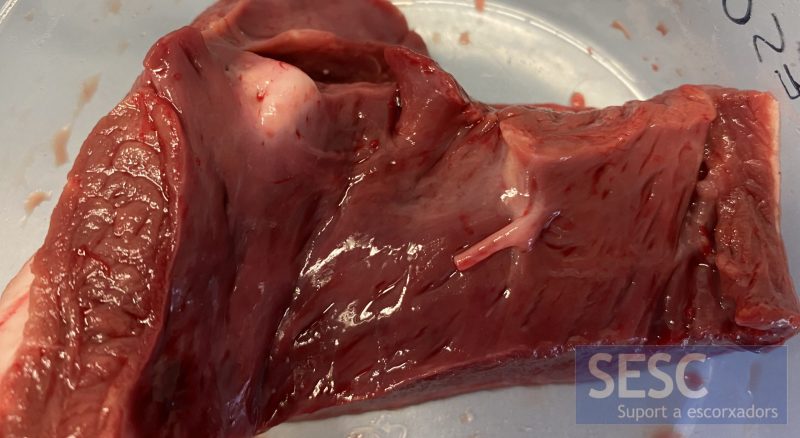 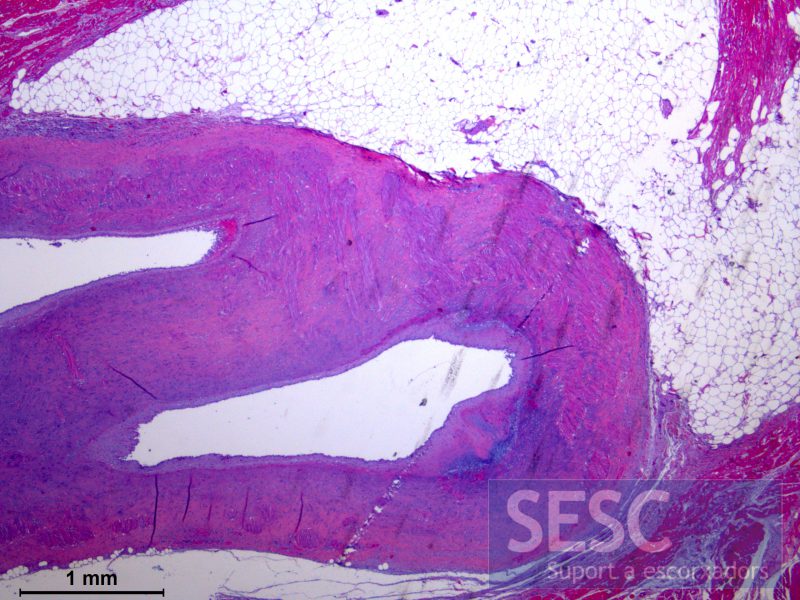 Artery. Hematoxylin and Eosin (H&E) Cross section of an artery that shows a marked generalized thickening of the middle layer and, multifocally, the inner layer with the formation of sclerotic plaques that protrude into the vascular lumen, partially reducing its lumen. Both layers appear expanded and replaced by a large number of hypertrophic muscle fibers along with a marked fibrous reaction. These obliterate and focally replace the internal elastic and extend into the adventitious layer and the surrounding tissue. 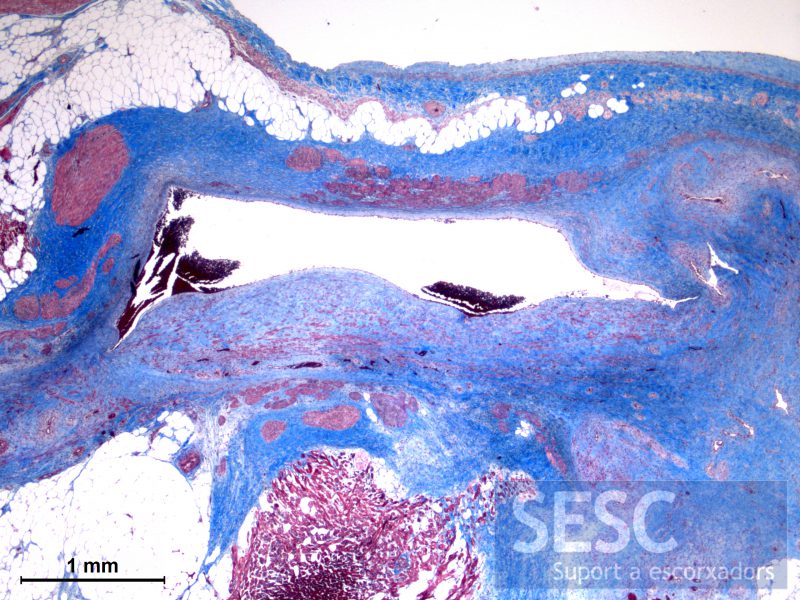 Artery. Masson's trichrome. Note the sclerotic plaques located in the inner and middle layers that cause thickening of the vascular wall, alteration of the vascular diameter, and partial obliteration of the artery. These plaques are mostly made of collagen (blue) fibers intermingled with hypertrophic (red) muscle fibers.