In a 15-year-old cross-bred cow, a unilateral increase in the size of the retropharyngeal and prescapular lymph nodes is observed. Upon section yellowish and slightly mineralized lesions generated a suspicion of bovine tuberculosis.

The histopathological study evidenced lesions of bacterial pyogranulomatous lymphadenitis, with Splendore Hoeppli images evidencing the presence of intralesional bacteria. The suspicion of tuberculosis is therefore ruled out.

Microbiological culture allowed a very abundant growth of a bacteria phenotipically compatible with  Pasteurella pneumotropica to be isolated from the lesioned tissues. In order to confirm this, the gene encoding 16S ribosomal RNA was sequenced and this sequence was compatible with Actinobacillus lignieresii.

Pasteurella pneumotropica is a pathogen, usually opportunistic, described mainly in rodents, but cases have also been described in rabbits, dogs and cats. There are also a few reported cases in immunocompetent people, often as a result of animal bites.

A. lignieresii is the causative agent of wood tongue, but in the literature some cases of lymphadenitis in bovine have been described due to this agent which, characteristically, is associated with the histological phenomenon of Splendore hoeppli observed in this case. (EV) 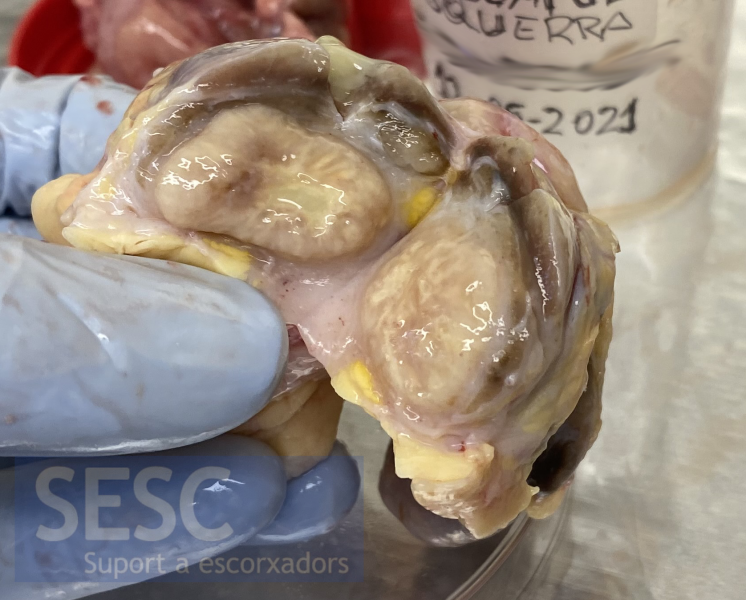 Prescapular lymph node of a cow with a pyogranulomatous lesion.