Last 22th  of April we organized a practical workshop on lesion identification and description for porcine slaughterhouse official meat inspectors.

To do this, we collected condemned viscera from to two pig slaughterhouses, which were the discussed in the session. In this post we discuss those lesions that were most frequent and/or more interesting, from which we also processed samples for routine histopathological assessment. (AC) 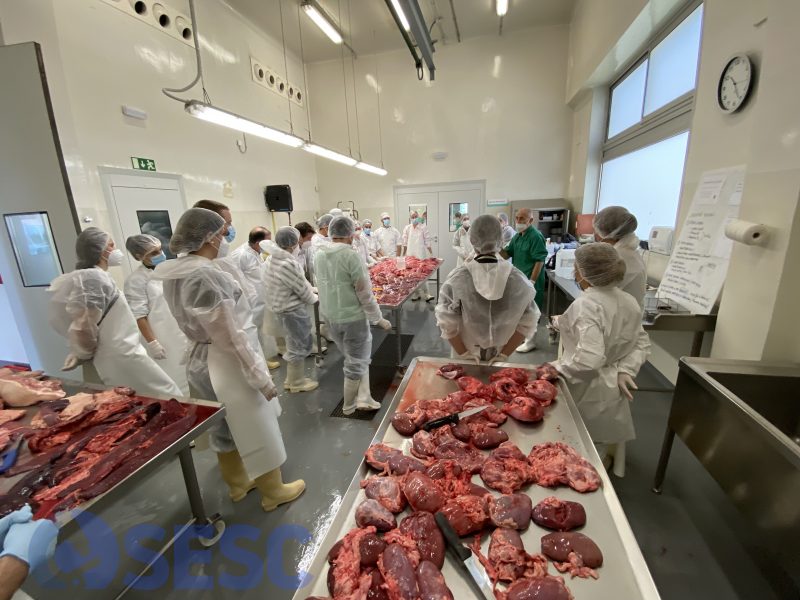 Pig lungs. The pleura shows a diffuse thickening and rugosity of the visceral layer. Histologically, this corresponds with a marked thickening of the pleura due to proliferation of fibrous tissue and marked vascular proliferation and activation (chronic fibrous pleuritis). 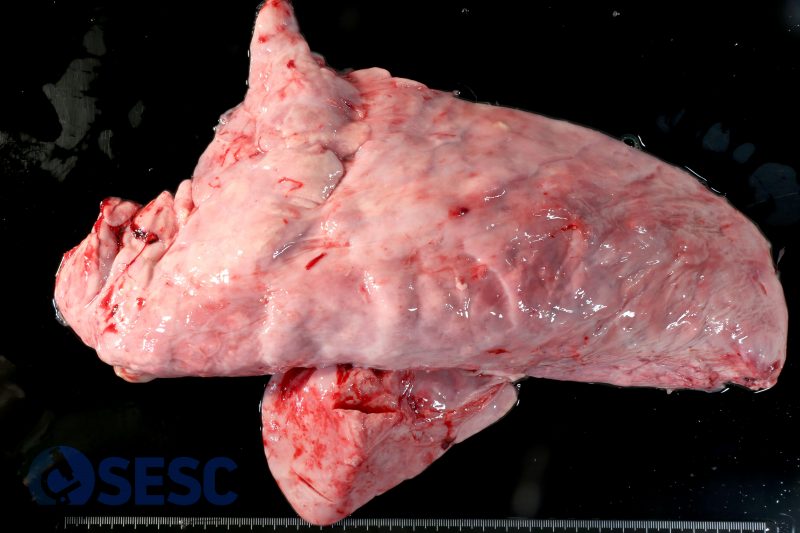 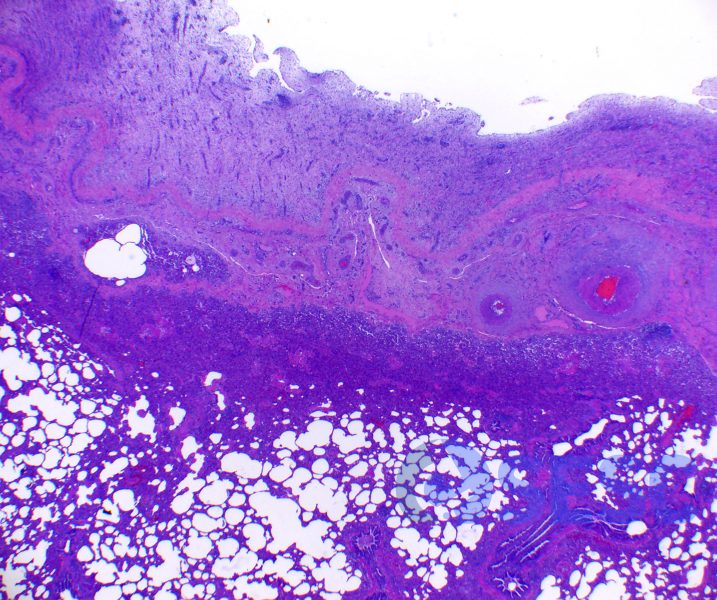 Pig lungs. In this case, craneoventral consolidation affecting apical, cardiac and craneal part of diaphragmatic lobes can be seen (depicted in red in the insert). To check if a lung is consolidated, if we put a fragment of lesiones lung in a container with water, instead of floating as the healthy lung would, the consolidated tissue will sink because the inflammatory exudate has displaced the air from the alveoli. Histologically it consists of accumulation of neutrophils in the lumina of airways and -to a lesser extent- alveoli. Also, marked hiperplasia of bronchial associated lymphoid tissue (BALT) can be seen, as well as peribronchial infiltrates, which are common findings in porcine chronic pneumonias, especially when Mycoplasma hyopneumoniae is present (porcine enzootic pneumonia). 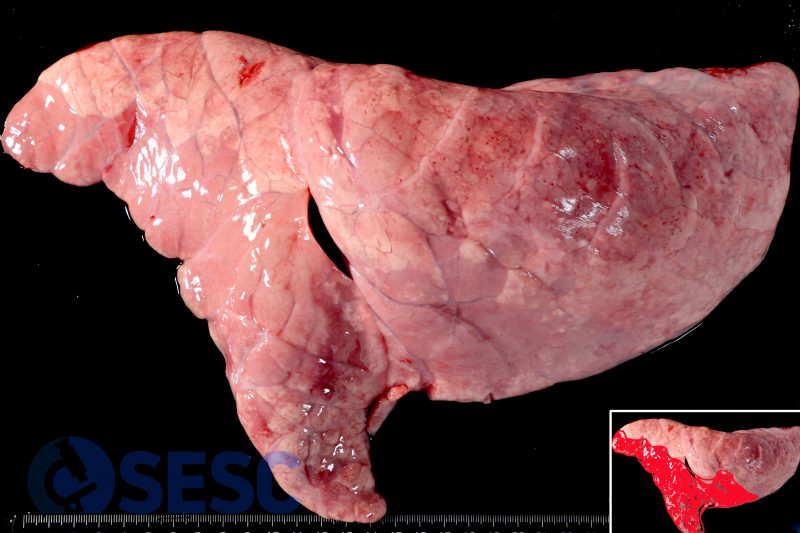 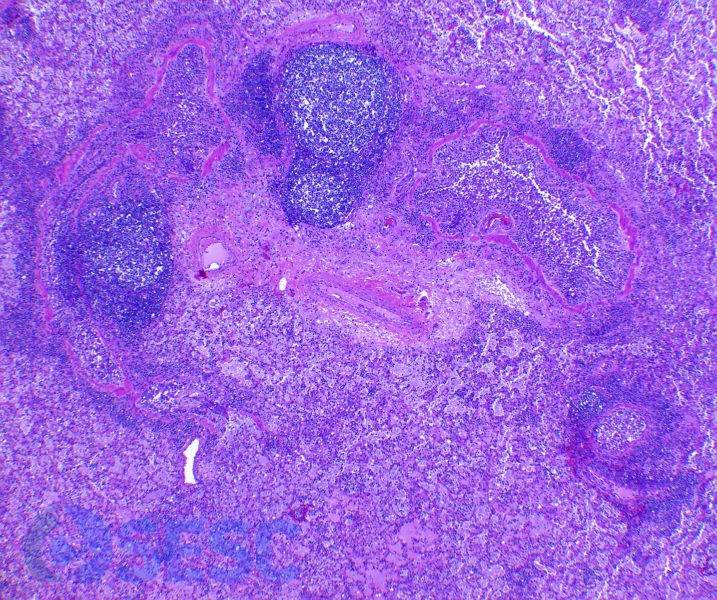 Pig spleen. The spleen is markedly enlarged (esplenomegaly), ans shows a diffuse reddish coloration. Additionally, the splenic parenchyma is friable. The omentum is tangled around the spleen. All these findings suggest that a splenic torsion caused a severe diffuse splenic necrosis. Histology confirmed the presence of a diffuse splenic necrosis and generalized blood imbibition, with presence of subcapsular distrophic mineralization. This finding is commonly associated to a mild jaundice of the carcass due to a secondary prehepatic bilirrubinemia due to the degradation of the erythrocytes necrosed in the spleen. 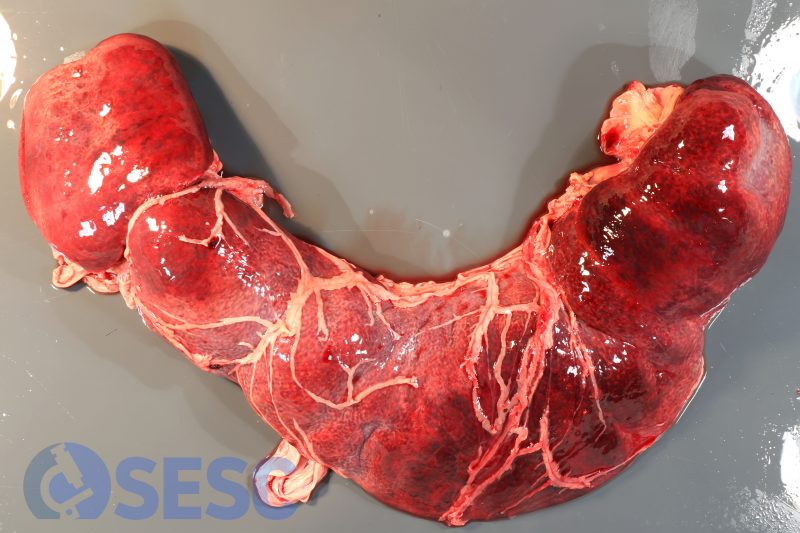 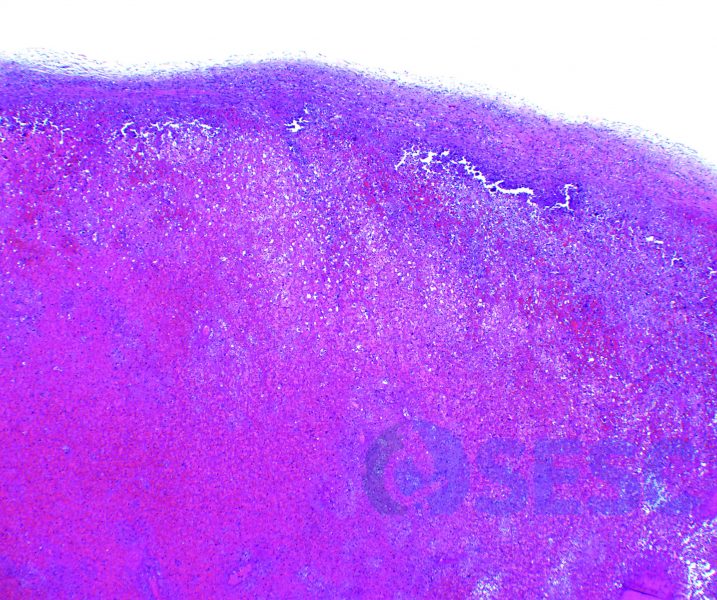 Pig spleen. In this case, the spleen shows multifocal reddish areas, which appear prominent and friable. The aspect of the affected parenchyma shows similar appearance to the spleen in the former case, but in this case the lesions show a multifocal pattern and are localized near one of the splenic poles. These lesions usually correspond to splenic infarcts. Histologically the presence of necrotic areas with abundant fibrin and hemorrhage, well demarcated from the adjacent parenchyma were confirmed. Due to the terminal splenic vascularization, it is frequent that vascular or embolic processes cause splenic infarction. In swine, the most important causes are CSF, PDNS and septic emboli, for instance in the case of valvular thrombotic endocarditis in chronic erysipelas. 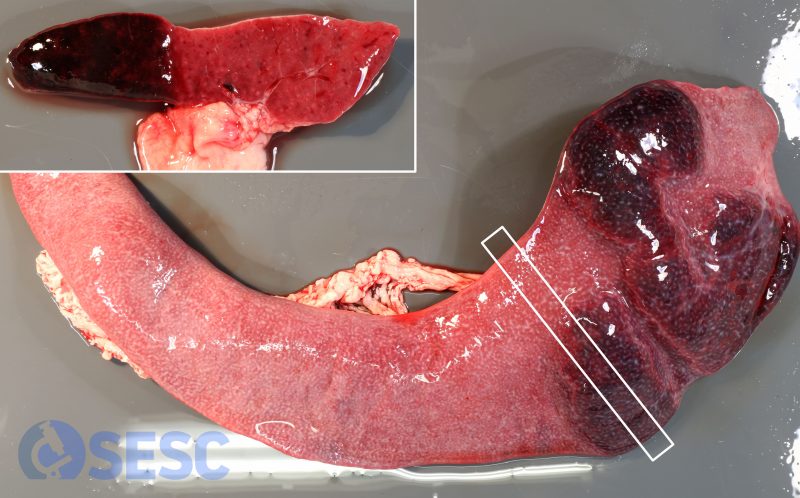 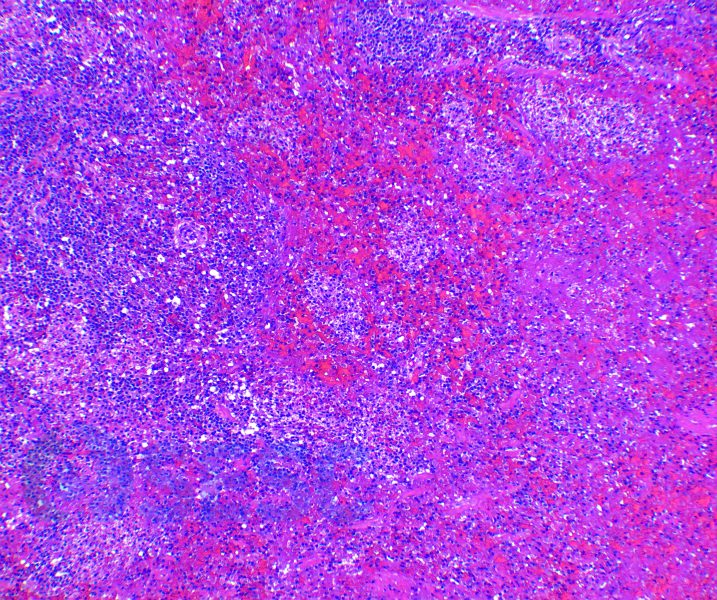 Pig carcass. At the caudal portion, ventrally to the sacrum, a muscular abscess can be seen. The localization suggests lymph node involvement. Histologically, abundant necrotic material with viable and necrotic neutrophils can be seen, surrounded by a wide fibrous capsule (abscess). Histologically no lymphoid tissue could be seen, thus it couldn’t be confirmed whether this lesion started in the lymph node.  A bacterium frequently isolated from similar lesions is Trueperella pyogenes. 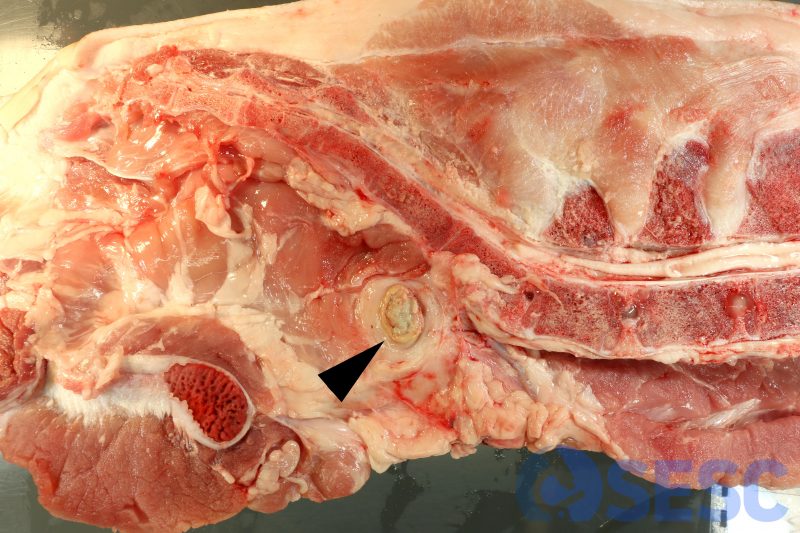 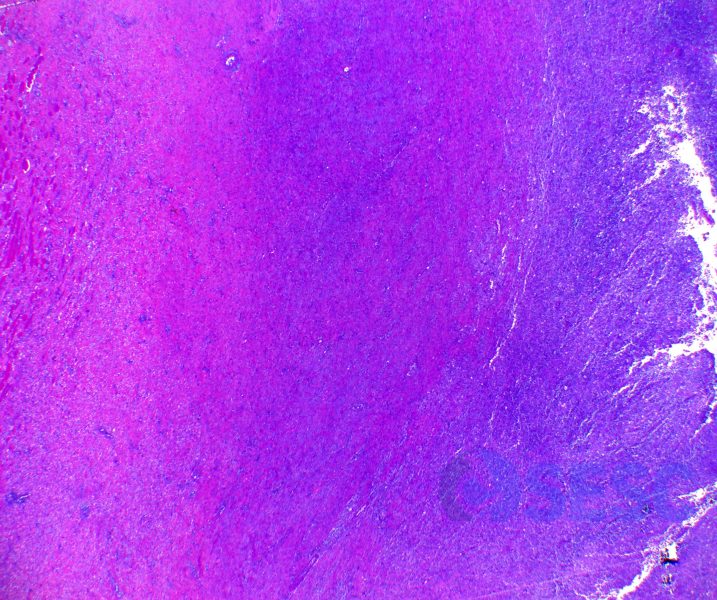 More common pathology cases found in porcine slaughterhouses are available in the 2018 edition post of this session.